Being obsessed with questions like: Who am I? What am I? Where am I? Why am I?
is not a recipe for happy marriage but it's a chronic condition with me, for better or for worse.

Below: "Map of Myself". NdA. Watercolour and ink. 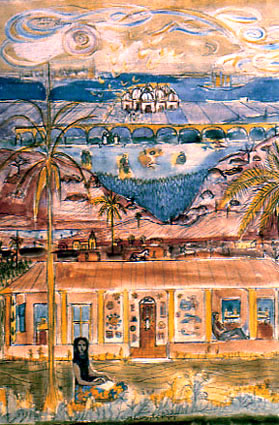 Reg was the opposite of the WWWW mind-set. 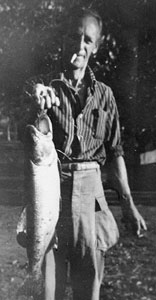 If there's such a thing as a Zen Man, Reg was Zen long before it became cool, way back when many thought it was the French mispronunciation of "then." The Zen way of being was natural to Reg, he didn't need to learn it. Had I been willing to find answers in the here and now instead of searching the sky and my psyche for signs and symbols, things would probably have turned out differently.

Reg immersed himself in our multi-faceted daily life, taking it as it came, calmly switching from milking cows to making pots to planting veggies to fishing to setting up exhibitions to sorting out local disputes to doing the housework whenever (often) I needed more time for My Art. Yes, Reg was a New Man before the species was invented. Apart from milking cows (which I opted out of, on the grounds of not being a morning person) I shared all tasks but always always, that WWWW theme tune was drumming in my head.

We were free spirits, we could and did stop whatever we were doing to make love several times a day. It should have been bliss. With hindsight (more accurate than foresight) I can admit, without guilt or regret, that the fly in our particular ointment was me. We had the ten-room house, plenty of space for all our shared or individual activities and I took over one wing as my studio, demanding, and getting, total privacy. Yet it didn't feel private enough, not mine enough. So I collected some bamboo and built myself a tiny shack-studio in front of the big house. I never did get to do any painting there as it was blown down in a storm. A lesson in non-possessiveness, perhaps, which I didn't learn at the time.

We planted trees as fast as we could but that strip of woodland was essential, for the kiln, for fuel and for countless tasks. Slowly but surely it was being eroded by persistent locals who, during siesta time when the sun was high and everyone was asleep, would cross the arroyo to our side and start chopping. Lying under our mosquito net in languorous abandon, we could hear the faint but unmistakeable sound: chop-chop, chop-chop.....It felt like having teeth pulled out. Worst of all, you could never catch them at it.

One day I could stand it no longer. I decided that even if I couldn't stop them, I would at least witness the crime being committed. Boiling with indignation at the injury being done to my land, I marched under the white-hot sky to the bushes at the edge of the wood and then got down on my belly and started crawling. I remember this vividly - knowing I was behaving insanely but unable to stop. Sticks and stones tearing my skin and clothes, insects feasting on me, but willing myself to advance silently as a snake towards the chopping sound. Suddenly, as I was nearing the creek, the chopping stopped. Their built-in Indian radar had detected an unwelcome presence and they were gone, vanished like smoke. I wept stinging tears of rage but gave up on the detective work from then on.

The same philosophy of ownership was applied to any small or large objects of ours which happened to be lying around - a plow, a cart, a calf, for instance. If we knew who the culprits were, we would confront them but they'd look at us with wide innocent eyes, declaring that they would gladly give us anything of theirs that we might want. We got nowhere with reasoning that if they'd only ask, we'd sometimes be willing to share things. Stealing was simply how things were done. It was quicker and more fun than asking. 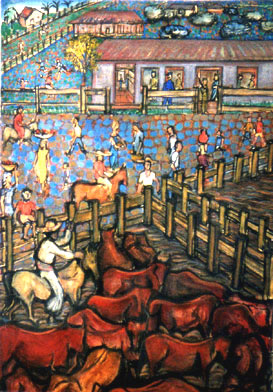 eanwhile I continued to be divided between different styles, searching for a direct, naive response to my environment on one hand but also wanting to be faithful to detail on the other. I painted the cattle market and many San Antonio village scenes from memory, but other subjects more realistically, from life - rocks, grapefruit, cows, people. A gallery in New York which specialised in artists from South America began selling some of my work which I would mail rolled in cardboard tubes. The Hollywood horror-movie maestro Vincent Price bought two watercolours of mine for his art collection - an unexpected bonus to celebrate in our remote hideaway. We were physically and mentally so far removed from whatever was fashionable or unfashionable "out there" that it really seemed like another planet. Our world was small and culturally limited but life was too busy and full to worry about such irrelevancies. Besides, it was easy to be big fish in the small pond of Paraguay and the RegNat-NatReg duo was establishing its presence. 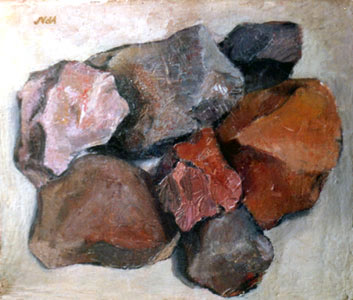