POSSESSION IS NINE-TENTHS OF THE PROBLEM 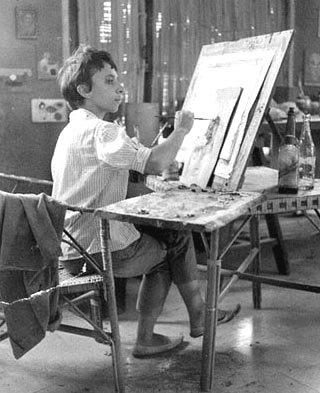 It strikes me that not only do we select what to remember and what to forget out of our vast store of past experiences, but we also choose what to take in and what to ignore while the experiences are actually happening. This is a fairly obvious fact but it hadn't really clicked with me until now.

Maybe we are all artists painting our life stories in different styles, depending on what we choose to focus on. You could even play a game to identify which movements or periods in art your version of your life most closely ressembles: trauma and drama most prominent? Expressionism? And so on. In my case, it would be a smorgasbord, a buffet, a stew. No, that's mixing metaphors. It would be a group-show (a group of one, in different disguises) featuring...oh, never mind, you get the picture.

The truth is that the way I absorb experiences has often been coloured by who I am with. I don't like admitting this since I prefer to consider myself to be wholly self-propelled. But since I'm investigating the Case Of The Buried Mickey, no clue can be left unturned.

Apart from the location itself, there was no ressemblance between the Paraguay that my husband and I experienced for the next six years and the Paraguay that I alone had known as a child and briefly as a young adult. Almost from the first day we arrived, that magic past aura was replaced by a sense of day-to-dayness, dutiful and proprietory. I wrote the following note at the time:

Dullness brought on by possession, any kind of possession: physical, material, mental, spiritual. When you come to a stage of feeling "this is mine", that's the end of the mystery and the beginning of involvement in all the problems of ownership. The mystery of not owning, not knowing what is for you or not for you, the insecurity of living without a fixed anchor - this is creative and alive and love. Here I am in my San Antonio, my house to which I always knew I would return, and everything - from how the toilet works to how not to be cheated or how much is due on each cow - is my business and I am busy busy all day running up and down the list of my responsibilities, towards this, my future. 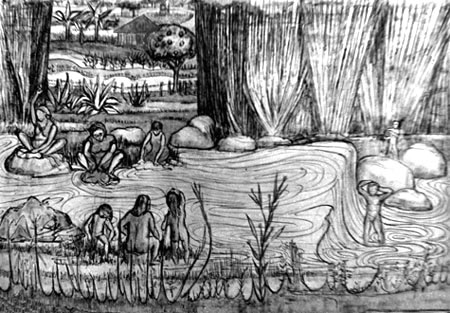 I can't recall whether we arrived from Brazil by air or by boat. I do remember the airport in Asunción, maybe from another trip. Sleepy runway, red earth, shimmering heat haze, small men in ill-fitting military uniforms (Stroessner was the long-running dictator), as permanent a fixture as the palm trees. It took many weeks and much monetary persuasion for our belongings to be released from customs but meanwhile, we took a bus to San Antonio to take possession of my family's estate, formerly known as the Quinta Recalde, renamed Quinta San Gabriel by us (okay, by me). 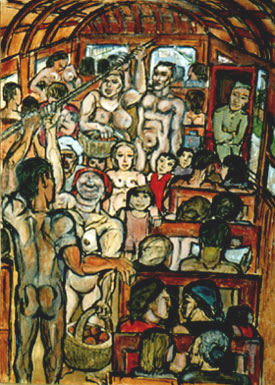 A bus ride out of Asunción to surrounding towns and villages was then - and in much of the world still is - an intensely touchy-feely experience. Crammed into a rocking, creaking, wheezing box on wheels, most likely driven by a chatty speed addict, it would be packed to the rafters with humanity, its babies, its market produce, its animals. The temperature guaranteed that none of the smells of this cargo would escape your nostrils and that the noise would spit into your ears like hot oil. My painting of such a ride was only a slight exaggeration: the passengers weren't literally naked. It was some time before we acquired a vehicle of our own (apart from horses) so these bus trips to and from Asunción became part of our routine.

Introducing Reg for the first time to my San Antonio, my Quinta, was thrilling. Stepping off the bus at a point where the road diverged, we had to walk the rest of the way along a rough dirt track to our portón, the property's gate, and then another long walk through patches of straggly woods, bare red earth, clusters of palm trees.

The orange and tangerine groves of my childhood had long since been wiped out - nobody could explain why. Some said a fire, others said a plant plague. Whatever the cause, the main income-producing aspect of the Quinta had perished with those citrus trees.

A few peons lived in thatched huts on our land, kept some cows and cultivated their patches of mandioca, in return for which they would work for us, si Dios quiere y la Virgen ("If God and the Virgin are willing." They often were not). One of these legitimate squatters was Alcantara, a gnarled and toothless Guarani who had been ancient when I was six and was no more and no less ancient now. Another was Felix, who was neither young or old. All were more or less toothless and all were happy to see us and seemed to have been there forever, children and all.

"Abuela". NdA. Acrylic. (the painting's colours are not accurately shown in this photo).

The long pink stucco house (my father-built house) was a huge disappointment to me. The couple who had been living there as sort-of-caretakers had happily decamped to Asunción when they heard that Reg and I were taking over. Nothing remained of the Paris furniture and the place was filthy, abandoned, sad, stripped of its magic. Except for the terrace looking down towards the river, and that unbelievable diamond-studded night sky. 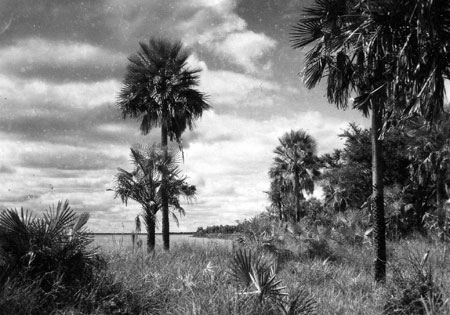 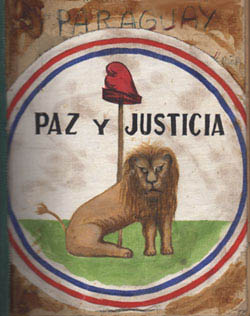 I did not draw this. It was a national insignia which I cut out and pasted on the cover of a journal I kept in Paraguay. Ironically (peace and justice were always in short supply) it was Paraguay's official motto. But what about that naive lion? Isn't he amazingly like the stuffed animal now sitting on my sofa? Some kind of synchronicity at work there. The lion found again, but not my mouse.

This thick, glue-stained exercise book suffered much wear and tear but is the only real record of part of the time that Reg and I spent in Paraguay and, as such, is a valuable document. Unlike the private journals I've kept for most of my life in which I let it all hang out (and I mean all) this journal almost managed to stick to the facts of our daily life, no doubt due to the influence of my husband, who was not at all a navel-gazing type. I say almost because now and then, here and there, I couldn't resist inserting bits of navel fluff. For instance:

For whose benefit is this accumulation of small details in a small world? They say nothing about us, about life here, unless we have become only facts and that our lives are merely these details. ...Wanting to be on the plane of ideas, emotions, meanings, and always being on the plane of appearances, facts, 'realities'. Wanting poetry and finding always prose.

Well ho hum. That girl who once was me didn't appreciate the poetry in ordinary life. She was a bit of a twit. Talented yes, but a fault-finding, self-important little twit. Now that I'm a different kind of twit, I look at this journal and find the prosaic details more revealing than the fluffy angst. 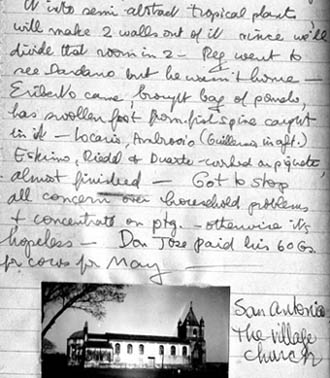 From the start, we realised that we couldn't, on our own, manage to run the Quinta's 120 acres, create a source of income and also find time to devote to art and craft. So we decided to find someone, preferably a couple, who would look after most of the practicalities and allow us to be free - or at least free enough. That was the plan. But the best laid plans of mice, and men, often end up buried in holes in the ground. 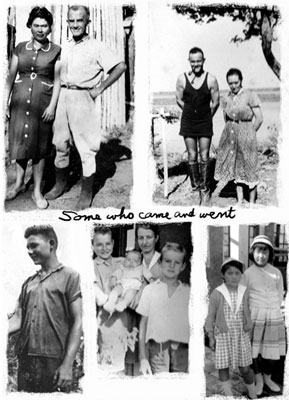 We put ads in the newspaper describing our ideal managers, to whom we would provide a house, some land, and a reasonable salary. To our great surprise, a large number of ideal couples and singles existed and responded to our call.

We whittled them down to the most ideal and they came to stay. And then they left. Or we fired them. And others came. And they left. Over the next few years we ran through approximately a dozen of these transients, all interesting characters, but not what we needed. Paraguay seemed to attract a type of shipwrecked foreigner, people who had somehow drifted to this place without really intending to be there.

There was the easygoing womaniser with his current woman (aptly named Dionisia) and her wild child. There was the military, pipe-smoking, ranting, raving Dane who beat his slavish wife.There was the brutish young thug with such a winning smile. There was the French nymphomaniac alcoholic mother of three budding delinquents.

Then there was a neat, polite, silent Japanese family who stayed a few months, planted beautiful neat rows of vegetables, bowed and left without ever saying a word. We never knew why they came or why they left but we were sorry to see them go. 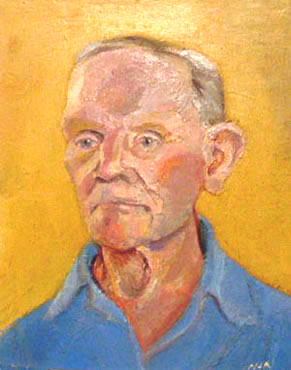 And among those washed up on the shore there would be an occasional elderly White Russian émigré, gently decaying but kept alive by memories of nobler times. Like Colonel Kermanoff whose portrait I painted, his watery blue eyes rewriting history. If I were rewriting my history now, I'd be asking him questions, letting him tell his story. But maybe it's enough to read it in his face.

Throughout all these comings and goings of personnel and the problems they created on top of the problems we already had, we nonetheless managed to produce creative work. I began getting portrait commissions, mainly from Americans who worked at the Embassy or for aid programmes, and I was given a part-time job teaching drawing to some of their Paraguayan employees. Reg built a wood-fired kiln, experimented with glazes for his pots and clay sculptures and designed some ceramic mural decorations for private houses. We were on our way to becoming nearly famous in Asunción.