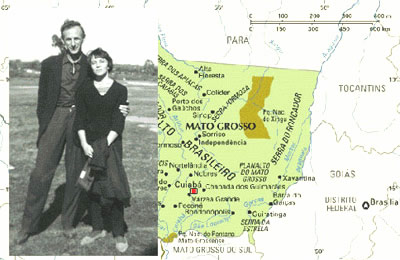 We are on a strip of land that has been shaved, like the bald stripe in a Mohican haircut, from the hirsute rain forest, about forty miles from Cuiabá, the capital of Mato Grosso, Brazil. Why we are there is entirely due to the peculiarities of character and the complex history of one individual, my father. But I'm not going to attempt an in-depth exploration of that individual's inner mato grosso (ie: big forest), at least not now and not here.

The closer you are to someone the less well you can see them. Logical, isn't it? If you're going to do a portrait you don't stand within a few inches of your subject's face. Only time gives you enough distance to illuminate what was obscured by your own shadow. Space alone doesn't do it. You can be physically far removed from certain people and still be so close that it's your fantasy picture of them which shapes your memories, your feelings. Neither love or hate or any variant on those intensities are good judges of character. You yourself are in the way so how are you going to penetrate the mystery of Otherness?

I could never "get" my father when I attempted to paint him. Photographs of him reveal much more. These were taken in New York by a professional who kept snapping away while Sacha talked. It's how he would have looked around the time that Reg and I were in the jungle. 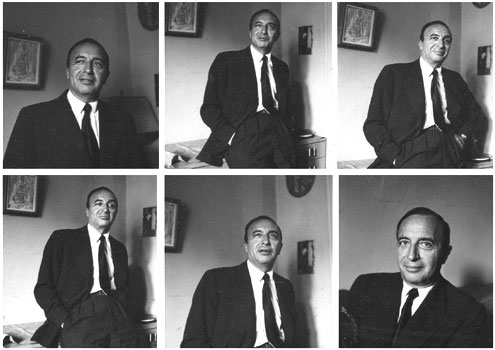 Below: Unfinished portrait of my father. Oil on canvas. 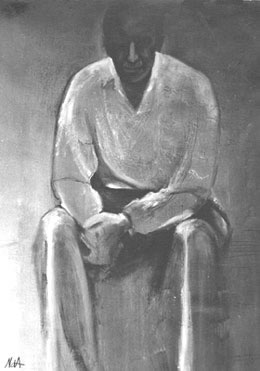 In the photos you can see his charisma and the persuasiveness which made Sacha's projects so irresistible. But what you don't see, because he was so good at hiding it, is his naivety. A sort of unworldliness. As if he never quite got used to having to deal with reality hands on. Because of this naivety he wasn't afraid to leap in where others fear and hesitate.

But that wasn't out of recklessness or even a love of adventure. He simply didn't believe that, once an idea had taken root in his mind, anything so flimsy as reality could obstruct its growth. Sometimes, he was right about this and he succeeded where the odds of success were almost nil. Other times, reality simply refused to cooperate.

Most of my father's ideas were Big Ideas, ideas which, as he saw them, had broad humanitarian dimensions - "pioneering" was one of his favourite words. He would think up a concept and it was up to others to work out the details.

The idea of a cattle ranch in the middle of the rain forest (at that time people weren't concerned about cutting down trees) was not unusual per se. But it was also going to be a resort, complete with golf courses (!) and - here's the humanitarian bit - hundreds of immigrants would be brought over from Europe, displaced people wanting new lives in a new world. Jobs and a village of well-built houses would be provided for them and of course for the local population, bringing prosperity and harmony to all. Reg's exploratory trip to the site had yielded lots of enthusiastic photos (lost, unfortunately) of the landscape and the natives but not much in the way of hard facts. 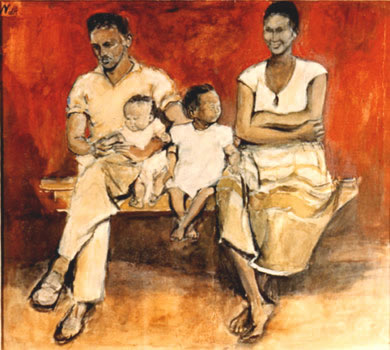 When we arrived there together after a bone-breaking truck ride from Cuiabá along muddy pot-holed roads in torrential rain, all I saw was a forest clearing on which a row of five or six prefabricated huts were lined up like soggy soldiers. Out of these shacks came a handful of Brazilian workers to greet me and Reg (their Boss), who had already made friends with them. Our prefab was the fancier one, with separate kitchen and toilet. Rain hammering the tin roof made conversation almost inaudible.

I tried to tell myself that yes, it was possible to set up home here for a while. We unpacked and I set about whitewashing the walls of our chalet, tacking plastic to the windows and installing screens over every possible opening.

What I didn't realise was that the insect population of this part of the planet had been waiting for us all their lives and were ecstatically celebrating our arrival - especially myarrival, since Reg's blood, being English, was rather phlegmatic. The natives' blood was of no interest to the biting hordes since it had long ago acquired immunity and what fun was immune blood? In my innocence, I thought that I could step outside lathered in insect repellent, take my sketch pad and camera and begin recording my exotic surroundings, especially the stunning giant blue butterflies (Morpho menelaus) whose iridescent wings flickering through the dark Brazilian forests can even be seen from the air.

The rhinoceros beetle is the strongest animal alive, relative to its size: it can lift 850 times its own weight. When I saw one of these science-fact creatures marching slowly toward me on a table, I pointed the camera and got ready to click. Cooler than cool, it opened its approximately ten-inch span of wings and flew straight at the heavy camera, knocking it (and me) over.

But that's nothing. Large insects I can live with. It's the tiny, invisible ones, those which can penetrate every conceivable barrier in order to crawl under your fingernails or lodge, for some reason best known to themselves, around your waistline, in your underclothes, inflicting such torture as has not been known on earth since pre-history. Those are the demons which made my father's Big Mato Grosso Idea unworkable and untenable for me and, to a lesser degree, for Reg who, being English....

No, it wasn't just the insects. This jungle deal wasn't what we had left civilization for. It wasn't the creative and fulfilling life we wanted and the Big Idea, seen in close-up with all its flaws and miscalculations, seemed neither feasible or desirable. After a few months (or was it only weeks?) I wrote to my father explaining why we couldn't stay and why we would soon be leaving for Paraguay, our original destination. He replied that he understood.

We spent some time in Cuiabá when we first arrived, when we left, and whenever it was necessary to buy supplies for the jungle base. In those days, it was not unlike the frontier towns of the Wild West in American movies. Everyone carried a gun and it was not unusual to see a man staggering out of a bar with a bullet hole in his chest. Alongside this violence were the frequent religious feast days during which the Brazilian genius for celebration and carnival was given free rein. I painted one of those days. 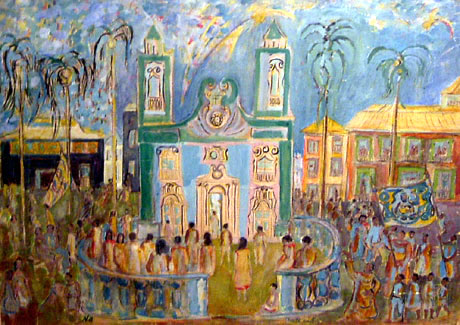