My father, who was Russian, often talked about the soul-cleansing practice in Old Russia (certainly not common in New Russia) of confessing one's sins aloud in a public place, the more public the better. What could be more public than a blog on the internet? Never mind if sin and guilt are endlessly arguable, I don't want to argue. I know what feels like sin to me and what doesn't and the following fragment is a public confession.

(I did the ink drawing below long before the incident but it fits so it stays). 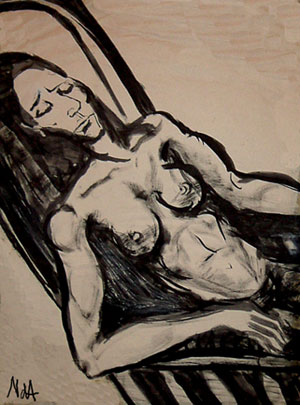 I don't remember actually deciding but I must have decided because one late night about six (or was it eight?) weeks into my pregnancy, my husband and I are driving along the streets of a remote suburb of Vancouver to an address where It will be done. He knew somebody who knew somebody who gave him a phone number and an appointment was arranged after agreeing to the exorbitant fee.

Not a word is spoken between us during that journey. We arrive at a house that looks like all the other houses along a vaguely prosperous road and ring the doorbell - I think it was one of those chimes. An ugly elderly woman with an unidentifiable foreign accent appears and brusquely orders Reg to go and sit in the car. To my dismay, he meekly obeys.

The executioner motions me into the anonymously furnished parlor and demands the money before she gets to work. I hand her the cash (does she wash her hands?). She tells me to remove my pants and lie on a dining room table. A cold shiny metal tool (does it look like a shoe horn?) is briefly inserted. There's an instant of sharp pain then it's over. The witch ushers me quickly out of the house, tells me to take an aspirin and go to bed. That's it. Deed done. Can't be undone.

Nobody told me so I didn't know that it isn't actually over until there's a corpse. Habeas Corpus. In my ignorance of such things I thought that It had died and somehow vanished right there on the dining room table. It was only when excruciating pains started after I'd gone to bed and I stumbled to the bathroom, heard something drop into the water and pulled the chain that the appalling truth struck me: I had just flushed the corpse of our unformed child down the toilet.

More pain, blood, a frantic night ride to Accident and Emergency. I have no memory of Reg's face, his expression or his words during that time. Of course he was there, but it's as if I was the only witness, the only participant in the crime. 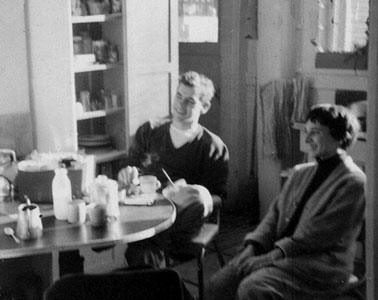 It didn't take me long to recover from the physical effects of the abortion, and the scar in my psyche was invisible even to me. We didn't talk about it and whatever resentment I felt over my husband's passive/active role in the matter was diluted by the business of preparing our exit from Vancouver, from Canada, from the continent of North America and from civilization as we knew it.

Reg had given notice at the art school. The house was put on the market but his son would stay there until graduation from university, which wasn't far off. Self-absorbed, I didn't notice the turmoil my stepson must have been going through. He kept it well concealed in a jokey, devil-may-care attitude but he was losing a buddy/father while I was gaining a whole new life. 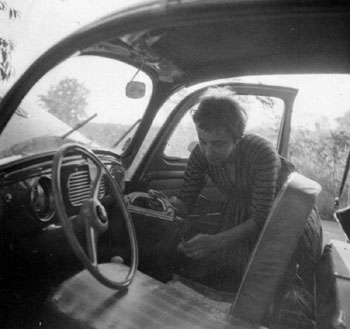 Reg and I had made our plans. We would take a belated honeymoon, driving slowly from Vancouver into Washington State then Oregon and onwards across America in a southerly direction to Florida then up north again to Vermont, where we'd spend some time with my family and gather goods and chattels and art materials to be shipped to South America.

Reg would leave first, on a reconnaissance trip to Mato Grosso, Brazil, where my father had started a project and, in his usual persuasive way, had convinced Reg to be its manager. Why a laid-back potter should be or could be the manager of an as yet non-existant cattle ranch-cum-resort in a jungle clearing, with me as his assistant, is the kind of detail that never bothered my father. My goal, shared by Reg, was to get back to Paraguay and I was a bit dubious about the Brazil lark but we agreed that it would help us financially and we would only stay there a minimum amount of time. 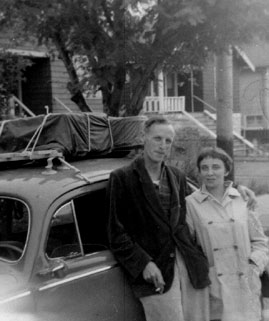 The seats of our Volkswagen folded right back, turning the car into a bed whenever required and we were equipped for camping all along the route. Leaving Vancouver, for me, was like coming up for air after a long imprisonment underwater. The doubts and shadows of my inner life had blurred my vision and my only response to the environment had been a stubborn "No!" If there was beauty and interest in the place, I didn't notice and didn't care. Now we were leaving it behind (forever, as far as I was concerned) and joy became possible again.

Being a couple changes you. I look different in my married photos, can't define why exactly. It's as if relating/accommodating to a partner day to day creates a new layer of self through which the previous layers can be seen but not distinctly. People were adressing us as "RegandNat" or "NatandReg". A new entity. Some people are born to be a couple, some are not. From earliest childhood I yearned to meet my soulmate and believed that my destiny as an artist and a woman would be fulfilled only through this union. Life (which knows you better than you know yourself) had other plans for me. 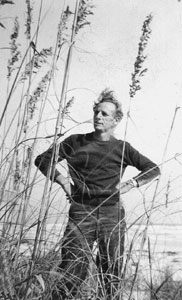 The road trip was wonderful. Every day a new landscape, new weather, new atmosphere. We avoided cities, keeping to the back roads as much as possible, stopping to buy groceries, finding scenic spots where we'd cook our meals on the Primus then retire to the cozy comfort of our conjugal car-bed.

Somewhere among my sky-high stack of diaries must be notes about this trip but I can't find them and, alas, no drawings or photos, except for a few on an idyllic, deserted beach in Florida (yes, there were such things). We stayed there several days, never seeing another soul. Swimming naked, making love under the stars, plucking oranges from the trees and squeezing them over fish caught by us right there on our ocean doorstep and roasted over an open fire. Adam and Eve.

Enthusiasm returned as if I'd never lost it. On that beach I built sand-castles - well, not castles but the model of a dream-city which we would create in Paraguay. Ever since I was about sixteen, I had dreamed of building what at first I called a Temple (shades of ancient Egypt!), then a Chapel, then a House of Music, then a City of Light - anyway, you get the mystical picture? I'd built small models, did lots of sketches, always changing, sometimes it would be a floating building, other times sunken into the ground, or up on a hill. It wasn't meant to be a place of worship nor an assembly of different religions but more like an environment designed to put one in touch with - allright, let's be pretentious - another reality, capital R. The Spirit. All that jazz.